A dozen current and former Notre Dame athletes will compete in the U.S. Swim Trials held at the Century Link Center in Omaha this week. For more information and times when ND affiliated swimmers will be competing, follow this link to und.com.

The Notre Dame Club of Omaha held its annual UND Night on June 7 at Field Club Omaha.  Nearly 90 alumni and friends attended the event that included a social hour and dinner, followed by the featured speaker, Ann Firth.  Firth was recently promoted to the Office of the President, where she works closely with Omaha native Fr. John Jenkins, C.S.C.   The club also awarded its Person of the Year Award to Dennis Murphy, whose contributions to the University and Catholic Education have benefitted many in the community and beyond.

Murphy, a 1971 graduate, began his career as an engineer at Kiewit Construction and worked on a number of major projects throughout his career.  He was later named president of Kiewit Engineering and oversaw numerous major projects around the country. 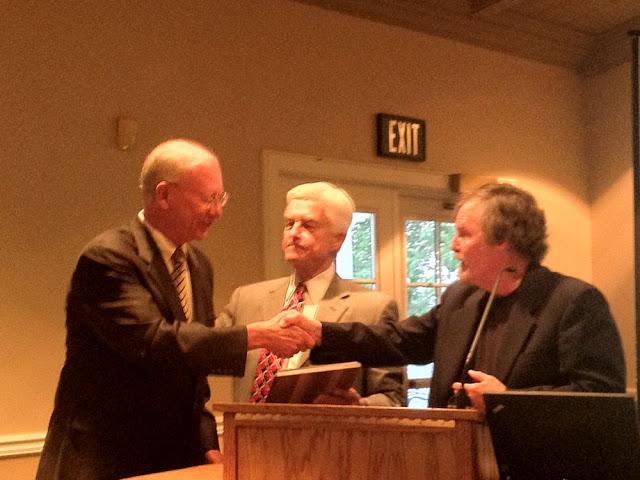 Mr. Murphy was introduced by board member Ron Gordon who highlighted some of his local contributions including his help with raising money and advising in the renovation of a new wing of a building used by Essential Pregnancy Services.  Gordon also discussed the contributions to local Catholic education made by Murphy and his wife, Ellin.  In addition to their local contributions, the Murphy’s have also established the Dennis and Ellin C. Murphy Irish Studies Library Endowment at the University. See below for a short clip from Murphy’s acceptance of the Person of the Year award.

Following the Person of the Year presentation, Ann Firth addressed the crowd and discussed her experiences past and present at Notre Dame. She began with some stories about her own

children who had graduated from the university or were currently attending and how their experiences mirrored that of many others. In her remarks, she also discussed her time in the Office of Student Affairs and the challenges and successes associated with that position. Firth closed by highlighting some of the recent additions and new initiatives taking place on campus, including the continued push to improve and expand research in all areas and strengthen Catholic character.